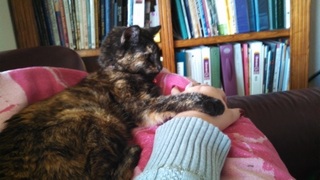 (From the tortoise shell feline, B.J. Hicks, to her Adopted Family: We serve our pets—our pets serve us—together, we serve the Savior.)

I was lonely and forgotten, and my world was filled with fear,
For the ones who claimed they loved me rarely let me come too near.
They had other pets they cherished, who despised my face and fur,
Hunted, taunted, and forsaken, I could find no cause to purr.

Heaven heard my wordless pleadings, and there came that blessed day,
When I found your home and shelter and new friends with whom to play.
So I chose you for my family, and although our time now ends,
I assure you by the God you love, I’ll live with you again.

I have been a mighty hunter, I have made bugs quake in fright.
Even birds and frogs have fled me as a stalked them with my might.
With your constant care and kindness, I have led a joyful life,
In my role as your protector, I found balm from former strife.

We have grown and played together, we have reveled in this world,
Finding happiness in little things, like puddles, leaves and squirrels.
Now my time has come to leave you—all our sharing must now end,
But I promise, by the God you trust, I’ll live with you again.

Think of me, with faith, not sadness, for my aged, ailing frame,
Has at last achieved that peace and rest I thirsted to obtain.
I shall miss your endless grooming, and the foods you served with love,
But I’ll frolic with a kitten’s strength in Heaven’s courts above.

I’ve run my course, I’ve fought my fight, I’ve conquered every foe,
And I’ll soon be in that Paradise the selfish never know.
So do not mourn, but hear instead the message I now send,
We can share eternal glory when I live with you again.

"I have fought a good fight, I have finished my course, I have kept the faith: Henceforth there is laid up for me a crown of righteousness, which the Lord, the righteous judge, shall give me at that day: and not to me only, but unto all them also that love his appearing."

﻿About 1999, a tortoise shell feline whom we later learned was called B.J. appeared at our back door looking for a handout.  She became a regular visitor.  After a few weeks of consistent feedings, we bought her a litter box, bed, and a rather large store of cat food.  B.J. had a new home.  It was only later that we learned she belonged to some neighbors—who were quick to urge us to keep her (and who told us that the name they had given her, B.J., stood for “Bonzai Junior”).  She had been their oldest pet, believed to have been born at least 18 years before, and she was despised and picked on by their new favorites--two dogs and two much younger cats.  Thus began a very profound and welcome period of mutual esteem between our family and B.J.  She is missed.