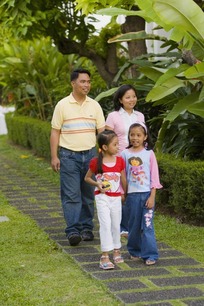 50. To Protect Marriage and Family

We weren’t all born in California, but we came to love its beauty.
Since the days when we were children, throughout every state we’ve roamed.
Of them all, we chose these mountains, and this sea that is our border,
And we love these friends and neighbors who have made us feel at home.

Growing up, when we were little, we’d watch Mom and Dad together,
How they worked hard to support us all and make our future bright.
They had challenges and problems, like most everyone around them,
But even through their errors, we could learn to choose the right.

We have had so many blessings from the families, who before us,
Tried to give their kids more than they had, and feel they were a part,
Of a chain that goes forever back until that first beginning,
When a man and woman pledged their love, and sought to share one heart.

Since our youth, we’ve had a goal that we would make a place that’s special,
As we joined ourselves in marriage, as we joined as man and wife.
And we seemed to know, inside us, that is when a people prospered,
As brave men and women promised that they’d share their love for life.

There are those today who think a word means anything you want it;
There are some who claim real marriage is not needed anymore.
Though we do not share their choices, they are free to make their own roads,
But there’s something so important here it cannot be ignored.

By our vote, we have the chance to keep our law in California,
And join the thirty other states who now show us the way.
We invite all here to help us to protect the dream of family,
And we hope that you will join with us this next election day.

We have come from all religions, and from every race and language,
But we share the rights of freedom, and we share this truth with you,
That a marriage is a him and her, a he and she together,
Nothing else will stand the test of time. There’s nothing else that’s true.

Those elections are long passed now.  The votes were counted. The people spoke. Historic marriage was affirmed.  Later, courts rejected the people's will.  Such erroneous rulings cannot serve to negate the truth of God's definition of marriage--a legal and lawful bond between one man and one woman.