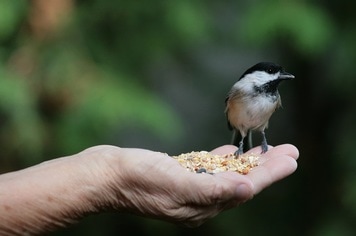 Context:  My youngest found a baby fallen from
the nest.  Its parents had abandoned it.  Thus
began a rather intensive series of feedings
with an eye dropper and the creation of a warming
box.  Eventually, the baby grew strong--and left.
How strange and how poignant our feelings remain
due to this experience.


You'll have noticed I've been absent,
From my clubs, and haunts and play.
At night I'm always hard at work,
But each and every day,
I've a baby boy who waits for me,
And chirps until he's heard.
As his "mom", I call him "Billy",
And I'm mother to this bird.

He's a dusky little fellow,
Mostly legs and lungs and tail.
From the way he always squawks at me,
You would think I run a jail.
Not one "thank you" ever leaves his beak,
But I do not need such words.
It's enough to have him in my home,
As the mother of my bird.

He is given royal treatment--
Three branch condo, private suite,
I feed him berries, worms, and mush,
There's no end to what he'll eat.
Though I never have been pregnant,
(The mere thought is quite absurd)
By the way I feed and care for him,
I'm the mother of this bird.

This baby has no self control,
He's never learned to wait.
And it does no good reminding him,
Of the fact the he just ate.
And every morn, as day breaks,
His impatience can be heard:
"Come here right now and feed me quick,
You're the mother of a bird!"

I listen to each peep and chirp,
As to a king's commands.
He nestles on my head at will,
And cuddles in my hands.
From this aviary escapade,
I hope I'm never cured.
I love to spend choice hours with him,
As the mother of this bird.

Now his ancestry is cloudy,
And I haven't got a clue.
If he's mocking bird or sparrow,
Or some mixture of the two.
But it doesn't really matter,
And though my pride must be absurd,
I'll tell the world I'm glad to be,
The mother of a bird.

“And out of the ground the Lord God formed every beast of the field, and every fowl of the air; and brought them unto Adam to see what he would call them: and whatsoever Adam called every living creature, that was the name thereof.”

“Remind the children that animals were created by Jesus and are a part of Heavenly Father’s plan. Heavenly Father and Jesus want us to be kind to animals. Share your feelings about a pet or about animals.”