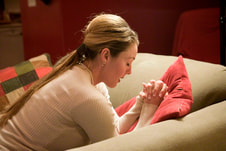 Upon my knees, with tear stained eyes, I kneel and ask of Him:
“Dear Father, Thou who art so wise, please hear my prayer again.
I do not know which road to take. I have not strength nor will.
My only hope is for Thy grace--please be with me until
The time is right, all is prepared, I see the open door,
And Thou wilt give me what I’ve asked, one thousand times before.
And yes, so far, it’s not been time, one thousand times and more. ”

The widow who sought justice done was given as our goal.
She did not stop until she’d won, and justice made her whole.
And if, we’re taught, a faithless judge will hear persistent pleas,
How better still will Father heed His children's cries in need.
But, we are warned, He’ll “bear us long.” There will be no reward
Until we prove we have the faith to knock at heaven’s door
For that good gift we’ve sought in prayer one thousand times before.

“AND he spake a parable unto them to this end, that men ought always to pray, and not to faint; Saying, There was in a city a judge, which feared not God, neither regarded man: And there was a widow in that city; and she came unto him, saying, Avenge me of mine adversary. And he would not for a while: but afterward he said within himself, Though I fear not God, nor regard man; Yet because this widow troubleth me, I will avenge her, lest by her continual coming she weary me. And the Lord said, Hear what the unjust judge saith. And shall not God avenge his own elect, which cry day and night unto him, though he bear long with them? I tell you that he will avenge them speedily. Nevertheless when the Son of man cometh, shall he find faith on the earth?”