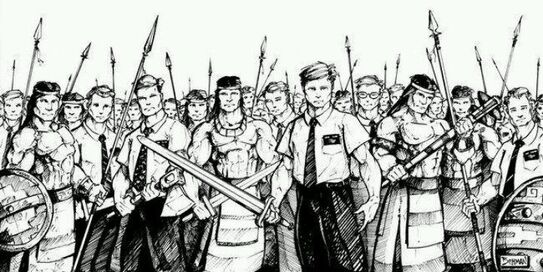 ​An Immortal Conflict Begun Before Our World Was

Through each space and age before us,
In each place that’s known as “Earth”. (1)
There has been an endless battle,
For a prize of infinite worth. (2)

Father’s plan to save each child,
Was opposed by evil seed.
Who proposed that they determine,
Just what rights we would receive.

Thus endured eternal conflict (3)
‘Midst free men and Satan’s slaves,
And the outcome of such battles
Would decide if man be saved.

In His wisdom, love and foresight,
Total, perfect, and complete.
Father raised His choicest warriors
Who would n’ere concede defeat.

On this Earth, God gave us Michael,
To begin our mortal test.
And in Heaven, His Jehovah,
Led the legions of God’s best. (4)

In Our Time, the Eternal War Intensifies

In our age and on this planet,
This same conflict rages still,
And we see that all around us,
Satan’s slaves would blind and kill. (5)

For our day and for our nation,
Defenders of Christ's Truth were planned. (6)
They are product of millennia,
Weapons of God’s loving hands.

These are Children of the Covenant, (7)
These are Keepers of the Flame,
And they pray in faith to Father,
Without fear and without shame.

They are freedom’s fiercest weapons,
For this time of doubt prepared.
They will never fail or falter,
There is nothing they won’t dare.

They do not contend with mortals,
Flesh and blood are not their foes, (8)
But they wrestle with dark powers,
Those who Father’s plan oppose.

Watch them bind on God’s own armor, (8)
Truth and righteousness and peace,
Shields of faith and swords of Spirit,
Fervent prayers that never cease.

To their ears, there comes deguello (9),
To their eyes, a flag of red (10).
For their families, faith, and freedom,
They fight till each foe has fled.

A Different View of the "Call to Serve"

Will you aid them in their struggles?
Do you now hear Jesus' call?
With the hosts of evil assailing,
Will you fight or will you fall?

If you dare to join Christ's army,
If your blood runs freedom red,
You will see them stand beside you,
'Til God’s foes are cowed or dead.

"And the Lord God spake unto Moses, saying: The heavens, they are many, and they cannot be numbered unto man; but they are numbered unto me, for they are mine.
And as one earth shall pass away, and the heavens thereof even so shall another come; and there is no end to my works, neither to my words."

“I press toward the mark for the prize of the high calling of God in Christ Jesus.”

"I have fought a good fight, I have finished my course, I have kept the faith:
Henceforth there is laid up for me a crown of righteousness, which the Lord, the righteous judge, shall give me at that day: and not to me only, but unto all them also that love his appearing."

“How art thou fallen from heaven, O Lucifer, son of the morning! how art thou cut down to the ground, which didst weaken the nations!
“For thou hast said in thine heart, I will ascend into heaven, I will exalt my throne above the stars of God: I will sit also upon the mount of the congregation, in the sides of the north:
“I will ascend above the heights of the clouds; I will be like the most High.
“Yet thou shalt be brought down to hell, to the sides of the pit.”

“And there was war in heaven: Michael and his angels fought against the dragon; and the dragon fought and his angels,
“And prevailed not; neither was their place found any more in heaven.
“And the great dragon was cast out, that old serpent, called the Devil, and Satan, which deceiveth the whole world: he was cast out into the earth, and his angels were cast out with him.
“And I heard a loud voice saying in heaven, Now is come salvation, and strength, and the kingdom of our God, and the power of his Christ: for the accuser of our brethren is cast down, which accused them before our God day and night.
“And they overcame him by the blood of the Lamb, and by the word of their testimony; and they loved not their lives unto the death.”

“And the mists of darkness are the temptations of the devil, which blindeth the eyes, and hardeneth the hearts of the children of men, and leadeth them away into broad roads, that they perish and are lost.”

6)  "To hold and regain ground in today’s war of words, the Lord needs a people both willing and able to humbly yet firmly defend Christ, His living oracles, the Prophet Joseph Smith, the Book of Mormon, and the standards of the Church. He needs a people “ready always to give an answer to every man that asketh …a reason of the hope that is in [them]” (1 Peter 3:15). He needs a host of true Latter-day Saints willing, in a spirit of meekness and love, to testify of truth when any aspect of the restored gospel is challenged!"  "Defending the Faith" Elder Jörg Klebingat, Liahona, September, 2017,

"And behold, ye are the children of the prophets; and ye are of the house of Israel; and ye are of the covenant which the Father made with your fathers, saying unto Abraham: And in thy seed shall all the kindreds of the earth be blessed.
"The Father having raised me up unto you first, and sent me to bless you in turning away every one of you from his iniquities; and this because ye are the children of the covenant."

“Finally, my brethren, be strong in the Lord, and in the power of his might.
“Put on the whole armour of God, that ye may be able to stand against the wiles of the devil.
“For we wrestle not against flesh and blood, but against principalities, against powers, against the rulers of the darkness of this world, against spiritual wickedness in high places.
“Wherefore take unto you the whole armour of God, that ye may be able to withstand in the evil day, and having done all, to stand.
“Stand therefore, having your loins girt about with truth, and having on the breastplate of righteousness;
“And your feet shod with the preparation of the gospel of peace;
“Above all, taking the shield of faith, wherewith ye shall be able to quench all the fiery darts of the wicked.
“And take the helmet of salvation, and the sword of the Spirit, which is the word of God:
“Praying always with all prayer and supplication in the Spirit, and watching thereunto with all perseverance and supplication for all saints;

9)    Wikipedia: "’Degüello’ is a Spanish noun from the verb ‘degollar’, to describe the action of throat-cutting.  El Degüello is a bugle call, notable in the US for its use as a march by Mexican Army buglers during the 1836 Siege and Battle of the Alamo to signal that the defenders of the garrison would receive no quarter by the attacking Mexican Army under General Antonio Lopez de Santa Anna. "Toque a Degüello" was introduced to the Americas by the Spanish armies and was later adopted by the patriot armies fighting against them during the Spanish American wars of independence.”

10)   At the Alamo, Santa Ana raised a red flag to indicate that no mercy would be shown by the Mexican army. In response, William Barret Travis, leader of the defending “Texians”,  wrote an appeal for help on February 24, 1836:

"I am besieged, by a thousand or more of the Mexicans under Santa Anna - I have sustained a continual bombardment & cannonade for 24 hours & have not lost a man - The enemy has demanded a surrender at discretion, otherwise, the garrison are to be put to the sword, if the fort is taken - I have answered the demand with a cannon shot, & our flag still waves proudly from the walls - I shall never surrender or retreat.  Then, I call on you in the name of Liberty, of patriotism & everything dear to the American character, to come to our aid, with all dispatch - The enemy is receiving reinforcements daily & will no doubt increase to three or four thousand in four or five days.  If this call is neglected, I am determined to sustain myself as long as possible & die like a soldier who never forgets what is due to his own honor & that of his country - Victory or Death.”

Increasingly, I receive new material as an immediate consequence of completed works.  This "tender mercy" was a swift consequence of #141, "The Return", which was itself received as an immediate "change of pace/tender mercy" from the intensity of #140, "What of Me?"--a piece which haunts me still.  [Actually, I have additions and a melody which might make #140 a song...someday--I'm still tardy in completing "From the Dust" (#125).  Although I have been given good news of a proposed score from my favorite songwriter, I have yet to bring that project to fruition.]

​Following some very cordial but brief opportunities to speak with missionaries just returned from Argentina [think of a "micro-Alma 17:1-3 experience"], I felt renewed and inspired by these consecrated men.   Pondering such sentiments, I felt within a new insight:  "Consecrated men/women, generally, come from consecrated parents" or adult role models/ministers/leaders/surrogates who act as such.]

With regard to one central theme of this piece, let us, together, ponder the words of President Russell M.  Nelson:

"Oh, there is so much more that your Father in Heaven wants you to know. As Elder Neal A. Maxwell taught, “To those who have eyes to see and ears to hear, it is clear that the Father and the Son are giving away the secrets of the universe!”.
"Nothing opens the heavens quite like the combination of increased purity, exact obedience, earnest seeking, daily feasting on the words of Christ in the Book of Mormon, and regular time committed to temple and family history work."  (General Conference, April of 2018:  "Revelation for the Church, Revelation for Our Lives".  [This "Covenant Path" thing works.]

Lest we become discouraged as the Father nudges us toward improvements and refinements, let us recall the prophetic and heartening message of Elder Jeffrey R. Holland:  "If we persevere, then somewhere in eternity our refinement will be finished and complete."  ("Be Ye Therefore Perfect, Eventually"  General Conference, October, 2017, underlining added.)

The outcome is sure.  We do not risk the heroic mortal end of the Alamo's defenders. God's wisdom is greater than the cunning of the devil.  (See, Doc. & Cov. 10:43).  The question before us is whether we will be among the spiritual victors.  Elder Rasband taught:
​
"Brothers and sisters, we are at war with Satan for the souls of men. The battle lines were drawn in our pre-earth life. Satan and a third of our Father in Heaven’s children turned away from His promises of exaltation. Since that time, the adversary’s minions have been fighting the faithful who choose the Father’s plan.
Satan knows his days are numbered and that time is growing shorter. As crafty and cunning as he is, he will not win. However, his battle for each one of our souls rages on.
For our safety, we must build a fortress of spirituality and protection for our very souls, a fortress that will not be penetrated by the evil one."  "Build a Fortress of Spirituality and Protection", General Conference, April of 2019; underlining added.

After watching the supernal "Face to Face, Children and Youth" presentation, the first verse of the eighth stanza was changed from "Elders of the Covenant" to "Children of the Covenant".  This was a needed and important modification--ponder it.