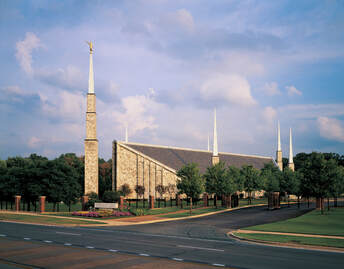 Despite recent, moving, spiritual experiences, the discord of current events has provoked some occasional contentious dreams.  I learned, late in life, the need for immediate, formal prayer by my bed when I am disturbed by the first hint of a spiritual attack--on the knees pleadings, struggling with the Spirit, invoking the enabling power of Christ's atonement--seeking Jesus' light to banish the darkness.

In the early hours one morning I awoke from an unwelcome dream experience and poured out my soul asking for a more uplifting event.  I was subsequently graced with a vision of Chicago, my youth, and the awesome men and women who had mentored me decades ago.  Much of that story is told in the "free verse" piece, No. 107, "Zion's Daughter Leanore".  Here is a different approach:

In the deep of the night came a dream of my Fathers,
Of the people and places I knew long ago.
Praying for Jesus' light I again felt a yearning,
For days, long since past, that had helped me to grow.

As if on wings of angels I traveled far Eastward,
To the Heartland I’ve not seen for so many years.
It was far from the “gathered” a few Saints were building
A new Stake of Zion from faith, struggles, and tears.

With the eyes of the Spirit, I saw my young parents
Leave the safety and ease of their mountain retreat.
Trusting all to the prophets, and grace from the Savior,
They would heed a rare call with their questioning feet.

To the great Windy City *  they came, although fearful,
That they had not the strength to survive “off the vine”.
But they brought in their frail hearts a graft of the Kingdom,
And they planted it there, in a soil Divine.

All around them a vast horde of strangers were toiling,
Seeking for the world’s treasures and praise from the vain.
But, undaunted, these labored to build up God’s Kingdom,
In a place mostly known for its gossip and trains.*

To my ears came a roll call of those who were valiant.
To my mind came the sight of dear Founders, long dead.
To my heart came a message of "Offerings Accepted".
To my eyes came unbidden tears onto my bed.

From small things there arose valiant works to God’s glory,
And a Temple of love for the Lord came to be.
The descendants of those who I saw in my vision,
Will forever sing praises of those “planters-of-seeds”.

At some grand future day all such stories, together,
Will be shown as a tapestry of the Divine.
We will see warp of service and weft of compassion,
Form a glorious picture made of God's holy twine.

* "Windy City" was not originally a nickname based on Chicago's meteorology--but an allusion to the citizens' many "wagging tongues" gossiping so much as to create a great wind!  The Chicago Rail Hub remains the largest rail yard in the world--although air traffic has overtaken rail's former popularity.  Sadly, I have not visited my birthplace for more than 50 years. However, as reflected in No. 66, I suspect that, were I to visit, I would neither recognize the area, nor benefit from the experience.  "I have moved on"--and so has my hometown.

3 Nephi 18:24--"Therefore, hold up your light that it may shine unto the world. Behold I am the light which ye shall hold up—that which ye have seen me do."

I was led to believe that the full view of such stories, which I did not experience, will only be revealed to the righteous.  Only glorified beings, "just men made perfect", can withstand the incomprehensible, blinding brilliance of such events in their fullness.  If we would see with the eyes of Deity, we must be like the Father, the Son, and the Holy Ghost.  All others are limited to mere shadows and weak glimpses of the glory of the sanctified, and how the valiant are cleansed in the blood of the Lamb.