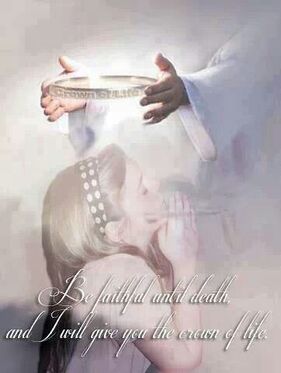 Source not traceable. Notify to Remove if necessary.
THE MOTIVATION FOR THIS POEM:

Nelda died last week.  There was no funeral or memorial service.  There was no public internment.  Her vision had gone, her hearing was very poor, and the “hearing aid” she had been given rarely functioned.  She also suffered from diabetes; a mouth without teeth; a broken hip; and so much more.  Despite all such challenges, she “showed up”. Every Sunday, some very dear sisters would lead her to and from the various rooms in our chapel.   To me, she was one of the stalwarts—one of those rare and choice individuals who “showed up”, no matter what.

Rarely did she complain, and even more rarely did she miss a meeting or an event.  She was, to me, an example of “fidelity” to the Lord.  She would offer gracious prayers; she knew her Bible very well (we learned that when someone has memorized large blocks of scripture, they no longer need to be able to read the same); she attended the temple; and she enjoyed the rich sisterhood in our Ward.  She was tempered by her afflictions.  In her final years, her grievous limitations and health challenges served as a kind of “refiner’s fire” to smooth rough edges and sometimes strained relationships from earlier days.

I was told she had been admitted to the hospital, and was described as this “little curled up ball of inanimate pain” lying in her bed awaiting her final hours.  I had not the courage to visit; and I knew not what I might possibly say, so I declined to see her but merely prayed from the ease of my home that she return quickly to her Heavenly Home to reap the rewards she deserved.  I should have gone.  I should have heeded the promptings.  I should have trusted in the Lord.  I should have.... I should have....

After she passed, and while pondering her circumstances, I learned that the Relief Society (See, No. 122--yes, those Daughters of the Lord) would hold a Remembrance Luncheon to celebrate her life. I asked if the Lord wanted me to give them a message.  It was only after much struggle, the verses below came to me.  They were the most difficult stanzas I have received in years.  I was taught several lessons by this experience.  Next time, I will "show up".

[I Compare My Cowardice to Her Fidelity.]

I did not go to see her there,
As witness to her final test.
The scene described I could not bear,
Nor had I words to give her rest.
She was a constant in my life,
As faithful as the rising sun.
Despite her suffering and strife,
She ended well what she’d begun.

[I Describe Her Final Mortal State]

She could not see; she barely heard,
She walked in awkward, shuffling steps.
And yet she always showed God’s Word (1)
She would be faithful till she slept.
Bereft of teeth, she still partook
The bread and water of Christ’s grace.
Despite a palsied frame that shook,
She worshiped in God’s Holiest Place.

[I Attempt to Acknowledge Her Reward]

Your cast down clothing is replaced,
With righteous robes of infinite worth. (2)
Christ’s crown of virtue frames your face,
And Temple slippers kiss your earth.
Your faith defeated death and hell,
Your piety showed Christ’s true light. (3)
In Heaven’s glory you now dwell,
Triumphant over mortal strife.

2)  2 Nephi 9:14--"...the righteous shall have a perfect knowledge of their enjoyment, and their righteousness, being clothed with purity, yea, even with the robe of righteousness."

2) 3 Nephi 18:24--"Therefore, hold up your light that it may shine unto the world. Behold I am the light which ye shall hold up—that which ye have seen me do."

When we humble ourselves before Heaven, and manifest to the Almighty that we have, indeed, learned from errors past, then we may be deemed worthy for experiences beyond our expectations--"songs unsung" of which we will not speak.  See:  Elder Jeffrey R. Holland, "Songs Sung and Unsung", April 2017 General Conference.  Today, "this time", "I showed up".